Did you know that le club de lecture in Bath is going to discuss Un pedigree par Patrick Modiano?

Le club de lecture ( book club) in Bath is now in its second year and Véronique, the French tutor, who is organizing it, is very pleased by the response and interest.
Students and teachers will be meeting next Thursday, for more info…
Of course, Patrick Modiano was very much in the media at the end of 2014 as he won the Noble prize for literature ( Le prix Nobel de la littérature).
He started writing very young, he always had difficulty expressing himself orally and he found writing the best way to communicate. He has written numerous novels ( de nombreux romans), a lot of them talking about the occupation of France in the Second World War ( l’occupation de la France pendant la deuxième guerre mondiale), about the quest for one’s own identity ( la recherche de sa propre identité), the absence of the father ( l’absence du père) . He has a keen interest in giving very detailed descriptions.
With the title Un pedigree, Patrick Modiano pays tribute ( rend hommage) to George Simenon who wrote an autobiographical novel ( un roman autobiographique) called Pedigree.
In Un pedigree, Modiano gives us details about his origins and his life up to the age of 22. His sentences are short, with  few verbs and no linking words, a little bit like lists. 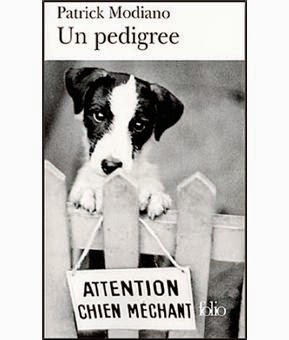 There will be another book discussed after Easter so look out for the title on our website or email us at in[email protected] to ask to be on our mailing list so that you can receive our newsletter with all the details of our events.