Did you know that today was the last day of the cycle race called Le Critérium du Dauphiné?

What is le Dauphiné and where is it?
It is an old region of France created by les comtes d’ Albin in the 11th century, they called themselves les dauphins ( le dauphin is the son of the French king) so the region was called le Dauphiné. It was an area in the East of France including Savoie to the North, it had its boarders with Italy to the East, with the river Rhône to the West and with Provence to the South. It became part of France in the 14th century. During the revolution in 1790, it was divided into 3 départements; l’Isère, la Drôme and les Hautes Alpes. 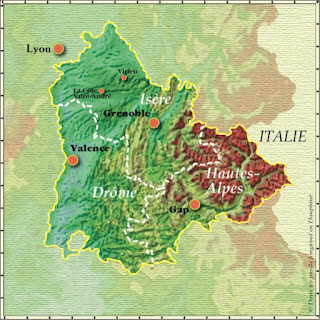 As you can see on the map, there are quite a lot of well-known towns such as Grenoble, Gap, Briançon, Valence and the famous ski resort L’Alpe D’Huez. Le parc des Ecrins is part of le Dauphiné, and is well known for its beautiful scenery and wild life.

You will also have heard of le gratin dauphinois, sliced potatoes baked in the oven with cheese and cream.
The cycle race, le Critérium du Dauphiné started in 1947, it always takes place in June, lasts one week, is very strenuous as it is so mountainous and is a good preparation for Le Tour de France.
It has just been won by Christopher Froome.
If you wish to know more about France and the French language, check our website for our various French courses, for more info…