John who was 98 last May, was a student in Martine’s French class for 16 years. We celebrated his birthday last year. 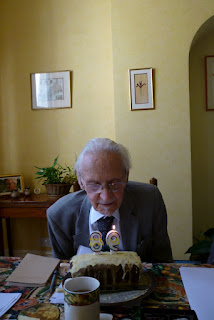 Here is a tribute that Robin, a student in the same French group, wrote about John:

John was a stalwart member of Martine’s groupe de mardi matin and it was with great sadness that we heard the news of his death on 25 March. At 98 years old, he was fondly regarded as le père du groupe. In spite of his great age, he was still very sharp mentally, read Le Monde regularly and kept us au courant with the finer points of French politics. He enjoyed French literature, particularly Mauriac and Colette. Unfortunately, John was very hard of hearing which made it difficult for him to follow and participate in discussion but, typically, he did not let this get him down. He was very appreciative of Martine’s efforts in helping him to cope with this problem. He was conscientious with his homework and prepared contributions to des nouvelles at the beginning of each lesson. He had a lovely, gentle sense of humour and we will all remember the day he teased us with an anecdote about a recent experience where he had lain supine enjoying the attention of three charming young ladies only to reveal that he was referring to a cataract operation he had undergone. In our end of term Christmas sketch, he played the role of Père Noël with great conviction and pleasure.John was always beautifully turned out, wearing a smart shirt, tie and dark suit. He took pleasure in providing good French wine to accompany our end of term lunches. When I went out for a pub lunch with him, he confided in me that he had a list of ten things he wanted to do before he reached a hundred: voilà comment il faut faire! It is good that John had a long, full life and that he died peacefully in his sleep. However, we will miss him greatly on Tuesday mornings. He was a real gentleman and we will remember him for his dignity, his humour and, above all, his positive outlook. Robin Young