Happy New Year and Good Health! This is what the French tend to say at midnight ( à minuit) on 31st December ( le 31 décembre) drinking a glass of champagne ( un verre de champagne), having spent the evening ( le réveillon) with their friends. 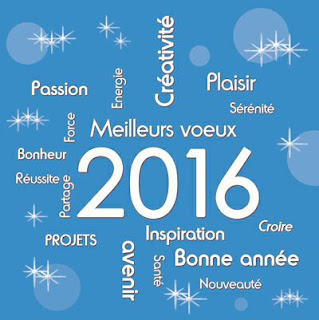 The night of 31st is called le réveillon du jour de l’an or le réveillon de la St Sylvestre. Why la St Sylvestre? Because it is the name of the saint on the French calendar on that day. Who was St Sylvestre? He was a pope between 314 and 355 but he has nothing to do with the new year, apart from the fact that sylvestre comes from the Latin, Silva which means forest. Trees, like the Christmas tree (l’arbre de Noël) are associated with this time of year.
The first day of the year has pagan origins and goes back to Julius Caesar which instaured it, it was then dedicated to Janus, the god with two heads, one looking back and one looking forward. It became officially the 1st of January in France in the 16th century with king Charles IX ( le roi Charles IX).
Now the French president presents his best wishes for the year to come to the French people ( présente ses vœux aux Français) from the Elysée palace ( le palais de l’Elysée).
There are normally some fireworks ( des feux d’artifice) on l’avenue des Champs Elysées where big crowds gather. But this year, because of the terrorist attacks in Paris on 13th November, there were no fireworks, only a show of lights on l’Arc de Triomphe, still a lot of people came. 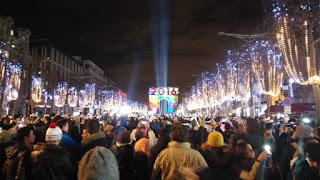 If you would like to find out more about French customs or simply learn French as a beginner ot at any level, you can enrol with Alliance Française de Bristol or de Bath, for more info…