The cineclub season is starting again in Bristol!

The first French film for this season is called Itinéraires ( Itineraries), at first glance it is a rather intriguing title, what kind of itineraries are we talking about? Travel ( voyage) ? Career ( carrière) ? Escape ( évasion )?
It is an action film ( un film d’action) by Christophe Otzenberger  with and Yann Trégouët, Jacques Bonnaffé, Myriam Boyer, Hélène Vincent, Céline Cuignet.
Thierry has spent a bit of time in prison. Now that he is free ( libre) he wants to lead a normal life but he happens to witness ( être témoin )  a murder ( d’un meurtre) and he is immediately considered the culprit ( le coupable).  He has no choice but to flee ( s’évader), he finds himself living a clandestine and precarious life ( une vie clandestine et précaire) ….. 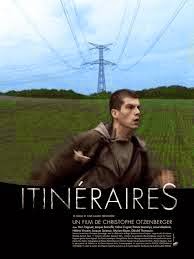 The cineclub is open to all students learning French with Alliance Française de Bristol but also to anyone with an interest in the French language. The film has subtitles in English.
The show is on Sunday, 19th October, 2014 at 6.30pm in The Lansdown, the entrance is free.
It is recommended to arrive early to secure a place and to get a drink in the pub before the film starts.
For more info…